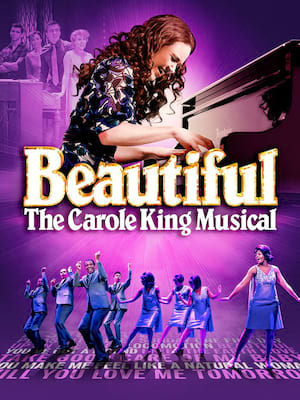 This smash-hit Tony Award-winning musical has won hearts on Broadway and the West End, and now it's going on tour across the UK! This musical biopic follows the career of Carole King, and endorsed by the beloved Grammy winner herself, Beautiful is the West End's most earth moving, feel-good musical and winner of two 2015 Olivier Awards.

Featuring songs from her back catalogue, as a solo artist and co-writer, Beautiful revisits 'Uptown,' '(You Make Me Feel Like) A Natural Woman,' 'You've Lost That Lovin' Feeling' and 'You've Got a Friend', amongst many more, with touching grace, proving it's much more than just another jukebox musical.

I FEEL THE EARTH MOVE!

Before rising to one of the 20th century's bestselling stars, plain Carol Klien was a talented teenager, living in Brooklyn and making music. But it's her co-writing, with husband Gerry Goffin that gets her noticed. Breaking through into the music business as a songwriter for some of the day's biggest artists, she discovers there is more to juggle whilst following her dreams. All is not what it seems with her fairy-tale life. It's only when we fall, that we learn to fly.

Lose yourself in the Tony winning Beautiful, and see the journey that led to finding her true voice and becoming the icon she is today.

'Will You Still Love Me Tomorrow', penned with Goffin, was Carol's first Number One hit, when she was just 17!

Suitable for audiences aged 11 and upwards

Annie Constantinou: “Beg or borrow for a ticket”

What an amazing show! A really must go experience for anyone who loves... more

Read all reviews Write a review

Sound good to you? Share this page on social media and let your friends know about Beautiful : The Carole King Musical at Theatre Royal Brighton.