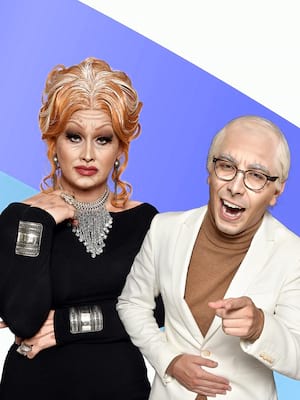 Straight or gay, everyone leaves this show with sides aching from laughter.

The devilishly delightful Jinkx Monsoon and Major Scales are back! Following the sell-out success of 2019's The Ginger Snapped, the drag-tastic duo take things to a whole new decade with Together Again, Again, hopping 45 years into the future, where Jinkx is desperately holding onto scraps of TV stardom and long-suffering collaborator Major has all but disappeared into musical obscurity. But don't fret, its time to get the band back together for one final stab at stardom!

Jinkx Monsoon has come a long way since winning season five of Drag Race. Not only can she turn out sickening looks, but the multi-talented Seattle queen is also a true theatrical star. Now, having sold out her last four shows, released the inevitable album (or three) and generally evolved into one of the most-loved Drag stars the show has ever produced, it looks like Monsoon season is here to stay.

A Queen that deserves every jewel of her crown.

RuPaul's Drag Race winner Jinkx Monsoon proves herself as one of the series' most talented and interesting alumni in this gloriously witty and heartfelt show. A Hedwig (of angry inch fame) for our generation...

Seen Jinkx Monsoon and Major Scales? Loved it? Hated it?

Sound good to you? Share this page on social media and let your friends know about Jinkx Monsoon and Major Scales at Theatre Royal Brighton.